Build an AI which controls a player inside a maze. The player can only see a certain number of places in each direction (5 in the video above). There are doors which can only be opened after picking up a key. The player is trying to get to the goal position in the fewest number of moves possible.

Second place despite getting the highest score. Don’t even get me started.

The AI builds an internal map of the entire board as it explores. After each move, it re-evaluates where it should explore based on current knowledge, generally going to the closest unexplored place at any given time. It knows whether or not a door can be opened based on the number of keys it has and also decides to grab known keys if they are very close compared to the distance to the next unexplored area. 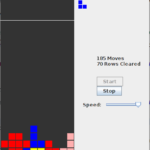 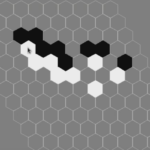